The best thing about New York? It’s a soul. And the best part of its soul? Brooklyn! Not so long time ago, Brooklyn was a separate city. And it didn’t want to unite with the rest of the New York. Now it could have been the third largest, most populated city in the USA. But then in 1898, it became one of the five parts of New York… Always remaining in the fancy shadow of Manhattan. But by staying in the shadow, Brooklyn managed to keep its charm. So if you decided to explore city’s best in a short period of time or you just moved and want to get to know the neighborhood, here’s what to see in Brooklyn in a day.

Brooklyn Bridge is one of the most popular tourist attractions. And not only in the neighborhood but also in the whole New York. This bridge connects Brooklyn and Manhattan. It will take you around 25 minutes to walk across the 1600 foot suspension bridge. But if you start taking photos it may even take several hours! Brooklyn Bridge has a wide walkaway where pedestrians and cyclists can move freely above the automobile lanes. In the end, you can also take a quick walk to Dumbo, which stands for down under the Manhattan Bridge overpass. This place with its picturesque cobblestone streets is full of nice restaurants, interesting shops, galleries but also modern apartments. 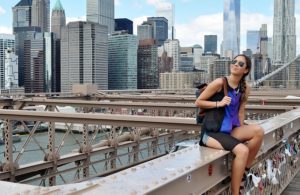 Go to a Brooklyn Museum

With around 700 art and cultural institutions, beautiful brownstone houses, the famous Brooklyn Bridge, the masterpiece of engineering, and priceless view over Manhattan, Brooklyn has a life of its own. But if you really want to expand your artistic views, be sure to go to Brooklyn Museum. As you may know, New York’s Metropolitan is really huge. Still, Brooklyn Museum comes right after being 560,000 square foot and five-floor tall building… So it’s a pretty big reason to visit it (pun intended).

In fact, it’s one of the oldest and largest museums in the United States. It’s closed on Mondays and Tuesdays, but the rest of the week you can enjoy majestic collections such of those of ancient Egypt. Also, Brooklyn Museum is home to works by Georgia O’Keeffe, John Singer Sargent, George Bellows but also stunning exhibitions that go from Basquiat to Ai Weiwei and David Bowie. It’s certainly one of the most artistic things you what to see in Brooklyn in a day.

If you want to experience the true spirit of Brooklyn (again, pun intended), you should know that Brooklyn is a place where ghosts of writers and artists roam around freely, choosing this neighborhood as their final destination. Yes, when you think about what to see in Brooklyn in a day, visiting cemetery may not be everyone’s cup of tea. But it’s a pretty interesting place with many concerts, tours, and exhibits so think about taking a stroll here. Placed between Prospect and Sunset Parks, it’s a resting place for icons like Jean-Michel Basquiat, Leonard Bernstein, Horace Greeley, and William “Boss” Tweed.

Take a bite at Williamsburg

Many things have been invented in Brooklyn like air conditioning and a teddy bear that got its name after President Roosevelt. It’s colored with flea markets, galleries but also the great food scene. And the best food is in Williamsburg. The heart of many culinary and cocktail specialties, Williamsburg is the place where you could rest your feet and eat your heart out in many restaurants, so you will hardly know where to begin. This hip place with vivid nightlife is also a place where you will find colorful street art, chic boutiques with many open sky concerts and markets.

Have a zip at Brooklyn Brewery

Brooklyn is a young neighborhood, with an average age around 34. So if you fall into a millennial group and like beer tasting, then Brooklyn Brewery is a place to go. Right next door to the Brooklyn Bowl (which is also a nice stop if you have time), Steve Hindy and Tom Potter found this brewery. It promises the best beer in the nation and should definitely be among places if you are wondering what to see in Brooklyn in a day. Still, this is no place to take the whole family, as children are not allowed to tour around here. The most recognizable beer is surely Brooklyn Lager made with the guidance of the beer master Garrett Oliver. Of course, with many classes and tastings, you can also brew beer on your own. It opens at 6 pm every weekday.

Have a stroll around Brooklyn Heights

The oldest part of Brooklyn is surely Brooklyn Heights and is one of the nicest parts of the question what to see in Brooklyn in a day. The romantic note of this place is highlighted with the fact that many great writers lived here. Some of them are Truman Capote, Arthur Miller, Carson McCullers, Norman Maile, and W.E.B. DuBois etc. Brooklyn Heights has tree-lined streets with cobblestone, brownstone houses, and bona fide mansions. But the best part of Brooklyn Heights is surely its Promenade, a mile long pathway. Here you can have an amazing view over Statue of Liberty, the Brooklyn Bridge, and the Manhattan skyline.

Spend your afternoon at Prospect Park

If you just want to take it easy and enjoy your day, take a walk through Prospect Park. With 90 acres of wide, open fields for various sports and trails for running and cycling, Brooklyn’s Prospect Park is a great alternative for overcrowded Central park. This park also has a zoo, a pond, all year ice skating rink (at the LeFrak Center) and the magnificent Prospect Park Carousel, so you can enjoy your day to the maximum. Here is also one of the city’s biggest Sunday’s greenmarkets at the north entrance.

Of course, Brooklyn is a big neighborhood so these are just hints on what to see in Brooklyn in a day. With a wide cultural and gastronomic offer, you can easily make your own itinerary and enjoy Brooklyn in your own way. Have fun!